Preparations for the race were dramatically interrupted in pre-race practice. Patrick Assenheimer, originally meant to share the #16 Mercedes, was unfortunate to suffer a fire in the car. Despite the car being badly damaged, Assenheimer thankfully suffered only minor injuries, but was ruled out of competing in the race. The Black Falcon team performed a miracle to rebuild the car, but they would have to start from 98th – yes, 98th – position on the grid. 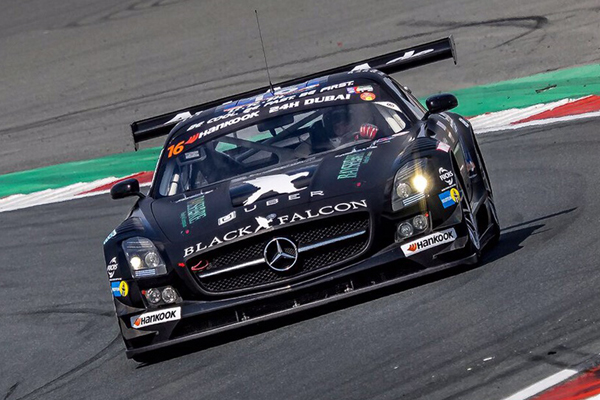 It was to be a weekend for miracles, as Christoudolou performed one of his own. The British driver, given the honour of starting the 11th Annual Dubai 24 Hours, passed 72 cars in the first stint of the race, 23 of them on his very first lap. The car was up to fourth position at the end of the second hour, with fellow Brit, Webb, able to make another 22 positions – 94 positions gained in two hours of racing.

From that point on, the task for the quintet was to avoid trouble, and they did just that. Steady progress was made, and despite having the ultimate pace of the winning Audi, consistency earned them a podium finish.

“I can’t congratulate the team enough,” said Christoudolou after the race. “It’s a remarkable achievement from them to rebuild an entire car after such awful luck in practice. Everyone did a great job on track, too, and even though it was frustrating to not be able to match the very fastest pace, we worked our socks off and got a solid reward for it. Everything, though, was for Patrick. I was one of the first to the medical centre after the fire, and it really hit home how dangerous this sport can be. We were all extremely pleased to see he wasn’t seriously hurt. Get well soon mate!”